You heard the story about Ozzy Osbourne biting the head of a bat someone threw on the stage thinking it was plastic. However, that’s not the only crazy thing he ever did. In fact, the man mostly known as the lead singer of Black Sabbath did nothing but crazy stuff. Here’s a few of the good ones.

Black Sabbath bandmate Tony Iommi revealed Ozzy dragged a dead shark into their hotel room and decided to give the walls a splash of, er, colour. Tony said: “With drugs always you get bored, so you must do something to one another. Like Ozzy hauling a shark through a window, dismembering it and soaking our room in blood.”

While on tour with Motley Crew in 1984, it’s alleged Ozzy asked Nikki Sixx for a line of cocaine, naturally. After being told there was none, he used the suitable replacement of a line of ants instead. Ozzy grabbed a straw, and snorted the hapless insects up his nose. Nikki confessed: “From that moment on. We knew there was always someone who was sicker and more disgusting than we were.”

Ozzy is surprisingly particular when it comes to his stage arrangement of his concerts. During filming of the reality show, his wife Sharon was given the power and pressure of organising something evil for his stage entry. Naturally, she opted for a bubble machine. Ozzy told her: “I’m f***ing Ozzy Osbourne, the Prince of f***ing Darkness. Evil! Evil! Whats f***ing evil about a s**tload of bubbles?!” 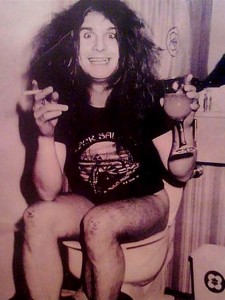 Due to an absurd amount of drug ”devouring”, Ozzy had ”slight” mental problems. In the opening stages of his auto-biography he writes: “They said I would never write this book. Well, f**k ’em – ’cos here it is. All I have to do now is remember something… Bollocks. I can’t remember anything.”

During the peak of his craziest days, Ozzy was holding a press conference with bandmates Black Sabbath but when asked a question he couldn’t process any words and remained completely silent. His fellow rockers joked and moved his head and jaw as if he were a puppet.